Hi my name is Brian Phipps, I am currently part of the Windsport Team who supplies Dart manufacturing worldwide along with technical and replacement parts, support and class coaching . I have been involved on the inside, outside and in the middle of Dart 18 sailing since “The Three Wise Men of Dart” realised the need for a catamaran that reached a broad spectrum of sailors who are now known as ”The Family of Dart”.

This is my pocket story of Dart involvement (abbreviated)

Panthercraft was formed in 1969 by two friends, Ian Fraser and Kim Stephens, who had a lifetime’s interest in sailing; both of them in, for those times in the early 60s, ‘strange’ craft. Kim sailed the international Canoe and Ian the Shearwater Cat and both had some success at National level.

When the Tornado catamaran was chosen for prospective Olympic status in 1966 Ian obtained one of the original Tornadoes from the designer, Rodney March, as a  ‘demonstrator’ at Restronguet in late 1968 and persuaded 6 friends to join him in building 6 boats. John Pitt, David Stonehouse, Brian Bishop, John Cooke, Graham Parkin and Ian pooled their resources and in the summer of 1969 established Tornado racing on Carrick Roads.

Kim and Ian both had the desire to ‘build boats’, Kim gave up his surveyor’s job with Ronnie Prior and he, with Ian, applied for a licence from the IYRU to build Tornado catamarans – not in wood, which was the method to date, but in GRP to Rodney’s specification. By using high tech laminates and materials only used so far in the aircraft industries Panthercraft built the world’s first all ‘glass’ Tornado which Ian sailed to 3 rd place in the 1970 European championships in Copenhagen. By proving the design and construction was capable of winning, orders for the boats started coming in from all over the world.

With the advent of containers it was possible to build boats in the old ‘clothing factory’ at Ponsanooth (which Kim and Ian had bought), load them in the field opposite Ian’s house and ship them to Hawaii, Los Angeles and Hong Kong and establish a thriving export business.

Panthercraft boats won all the major international events and Ian won the World Championship in 1971 and the Europeans in 1972. At the peak of production the firm was building some 100 Tornados a year. With the adoption of the Tornado for the 1976 Olympics both of the partners realised that the prospect of making a living out of just one product was numbered. There were approximately 30 licensed builders around the world chasing a very select market and to survive  Panthercraft needed a more universally popular design. Terry Pearce who had, along with Rodney March, engineered the building of the original Tornado for its ‘trials’ in 1966 joined Ian and Kim to pool their experiences and produce an outline of the boat that they would wish to sail. Attached is the original design parameters that were given to Rodney whilst they sat on a park bench opposite Marble Arch!

They were determined to ensure the boat they built would survive and prosper and form the basis of a successful venture.At this time the IYRU Multihull committee were proposing to hold trials in Los Angles in 1976 for the adoption of a new 2-man catamaran of about 18ft in length. Thus the Dart was born out of necessity and a bit of luck. 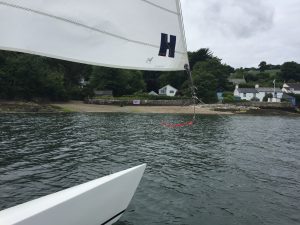 The first pre-production boat was launched in the summer of 1975 in great secrecy from Restronguet Weir, the site of the original RSC clubhouse made available to the club by Kim’s mother. The boat was put in the water with covers on the hulls – the partners were paranoid that there were spies everywhere and that the revolutionary hull form would be copied! It was not far from the truth because, a year later, one of their distributors did just that and did considerable damage to the Dart’s progress in Germany.

The boat was thoroughly tested on Carrick Roads during the summer of 1975 sailing against a Hobie 16, the most popular catamaran in Europe at the time. It’s true to say that very little was changed on the prototype and the first production boat, 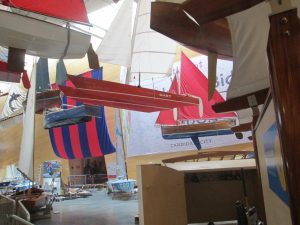 Dart 1, was built in the Autumn and was still sailing regularly with Ian at Restronguet in the early 2000’s. Dart 1 is now in the National Maritime Museum in Falmouth. Dart was a success from the beginning; it combined good looks with simplicity, had no dagger boards, no boom and simple rigging. It could be righted from a capsize by one person and was light and fast; it catalysed the myriad catamaran classes which existed at the time and enabled those without a crew to sail on equal terms by leaving the jib ashore.

Two boats were shipped to Los Angles in March of 1976 and were pitted against a dozen other cats from around the world. It is interesting to note that Hobie Alter, the father of the Hobie range of cats, deemed it un-necessary to attend the trials even though the Hobie Cats were built ‘just down the road’. Hobie felt that these trials were an unnecessary diversion. What he didn’t fully appreciate was that in Europe most inland countries only allowed National and International recognised classes to sail on inland waters. To gain that recognition was very Important if Dart was to become a successful racing class. Ian sailed the boat with Carol Rodgers an old friend from San Francisco, and Terry sailed the single handed version.

The whole campaign was a great success as the exercise was planned to the last detail including the final text of the class rules; most classes were still writing theirs by copying Dart’s. It took another 4 years of negotiations with the IYRU to finally gain International status – mainly because the partners were not prepared to relinquish the copyright and allow the authorities to licence other builders world-wide. The ownership of the rights still resides inCornwall and although the boats are now built elsewhere the class retains a very strong Cornish connection.

By the time the first National Championships was staged at Restronguet SC in 1977 there were about 600 boats sailing in National fleets formed throughout Europe. The first European championship was held at Carnac in France in 1978 which attracted over 65 boats and France, through Lucien Gourmez, became one of the leading Dart fleets. The boat was now being exhibited at all the major boat shows in Europe and was attracting fleets in excess of 150 boats at various meetings on the continent.

The recession in the late 70s slowed things down for a while and Panthercraft slimmed down from 50 employees to 18 in the space of 3 months – the directors went back to making rigging and fitting out the boats. Ian went to Australia for a year to try to establish the class in a different region but that failed since the recession followed him out and he discovered that there is nothing worse than a ‘whingeing Pom’ except a ‘whingeing Pom’ who has seen it all before.

The business picked up as did the British economy in the late 80s and Panthercraft flourished. They were now producing a 15ft version of the Dart called the Spark and a 20ft version the Stampede. After much soul searching Kim and Ian accepted an offer from the builders of the Laser dinghy, Performance Sailcraft of Banbury, for the purchase of Panthercraft; they decided that after 20 years of building small boats not many people came away with something to show for it and decided to
take another tack.
The first World championships was held in Abersoch, Wales in 1991 when 200 boats turned up and the longest starting line ever known was masterminded by Kim as race officer. It was all a great success really though at the time it was a bit of a nightmare.
The class still thrives and the most recent World Championship in South Africa held over the Millennium celebrations saw over 100 boats from all over the world contest the event.
Brian Phipps 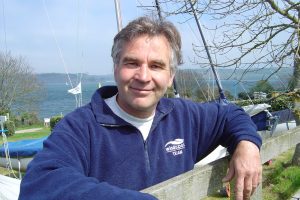 A member of the” Family of Dart” for 40 years